The city of Bouillon is located in the province of Luxembourg, which is a part of Belgium (not to be confused with the state of Luxembourg of the same name!) and has a very exciting history. This was mainly due to its geographical location and the presence of a fortified castle overlooking the city.

The main conflict of this history began in the 11th century when Godfrey of Bouillon, one of the leaders of the Crusade, was forced to mortgage the Château de Bouillon to pay for the campaign. As a result, the city came under the control of the bishops and for many centuries was the cause of contention of the European aristocracy. There is a certain reason why the Marquis de Vauban, France’s master of military affairs, called the Bouillon “Key to the Ardennes”, the mountain system that connects the territories of the region’s main neighbors – France, Belgium, Luxembourg, and Germany.

The modern Bouillon is a typical European tourist town with the necessary set of attractions: a castle on the mountain, the historic center, market square, cafes and souvenir shops. We must pay a tribute to the local administration – everything is preserved in the best possible way.

It is not a coincidence that we came to this city – our dear friend celebrated his anniversary and organized a meeting of guests from the different countries in the local Bouillon landmark – “Auberge du Moulin Hideux”. “The Terrible Mill Hotel” is a 17th-century manor house where the mill was actually once located. However, its interior is rather reminiscent of a castle – the finishing of the floors and walls with wood, vintage furniture, many salons, halls and recreation areas are very equipped for the idle pastime. Or for the parties 😊

In general, there is a wonderful tradition of gathering friends from the different countries in Belgium about once every five years – last time we were the same company gathered for the wedding anniversary in Brussels, and then went to Ghent (this city would be worth writing a separate post – it is very good). The most important thing we did in Ghent was to take a tour with a private guide and see all the local sights in a couple of hours. This approach saves time and broadens horizons, all in one 🙂

This time the joint leisure did not let down, and this weekend will be remembered for the next 5 years (hopefully!). Leisure options were plentiful, and our group of more than 20 people spent this weekend all in a breath and in a burst of inspiration 😉

As for visiting the town of Bouillon, except for the castle, there can be called the classic “places of power” like a market in the central square. The market here is organized with the interests of tourists (not only of locals), and offers a variety of specific souvenirs such as craft vests and sheepskin sneakers made using old technology, hunting costumes and local infusions. Also on the market you can try local cuisine and generally have a cultural time.

In general, the visit to Bouillon left a pleasant impression. If not for the specific reason for coming, it could be a pleasant point on the route of travel in Belgium, where, in addition to Brussels and Bruges, there are many other equally beautiful cities. I suspect I will have more posts on this topic 😉

And to top it off, I wanted to mention that this time for the first time we took our dog on an airplane. To do this, we arranged for the necessary documents (in fact, a stamp in the passport with a mark of confirmed health), bought a pet ticket and placed the animal in a soft carrier according to the airline’s standard. Our faithful friend endured the flight normally, although he was dissatisfied with the carrying. But he has been to Belgium 😊

Advertising: best beaches of the world can be found at 1001beach.com 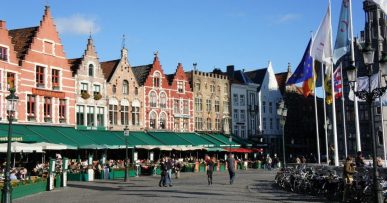