Visiting Lisbon: what to See in Lisbon in 3 Days?

Visiting Lisbon: what to See in Lisbon in 3 Days?

It goes without saying that Portuguese culture is very distinctive. Its capital features plenty of interesting and unique attractions. Lisbon is an incredibly beautiful and expressively modern city. Three days is enough to discover this wonderful location. During this time, you will be able to see all the main tourist attractions, get acquainted with the vibrant and rich nightlife of the city, feast on exquisite cuisine, and create wonderful and unforgettable impressions of this amazing European city. So, you can spend a few days here perfectly.

The First Day Visit to Lisbon

It is best to start your acquaintance with the city from the historical center. Here, you will see most of the impressive sights. First of all, visit the liveliest part of the city, namely the Marquis of Pombal Square (Praca do Marques de Pombal) and the Avenida da Liberdade Boulevard stretching from it. They acquired their modern look at the end of the XIX and the beginning of the XX century.

What matters here is that Pombal Square is the most important transport interchange in the city. Here is a metro station of the same name. In the center of the square, there stands a 36-meter monument to the Marquis of Pombal, an outstanding Portuguese politician, who rebuilt Lisbon after a catastrophic earthquake in 1755.

Avenida Boulevard is an analog of the Champs Elysees in Paris. A huge number of boutiques, restaurants, and other similar establishments are concentrated here. Walking along the avenue, you can come to the Restauradores square. Nearby is the Gloria lift, which lifts tourists to the observation deck of Sao Pedro de Alcantara.

Go to Rossio train station. Interestingly, its building is considered an architectural monument. In the center of Rossio Square, there’s a column with a statue of Emperor Pedro IV. The covering of the square features a 3D effect of sea waves, which is quite common in the city. The whole area is surrounded by numerous cafes and shops. Next to Rossio, there is Figueira Square.

Not far from here, there is the Baixa-Chiado area. It is a real heart of Lisbon. Here is a quite popular and one of the most unusual sights of Lisbon – Santa Justa Elevator. The height of this elevator is 45 meters. Tourists use this lift primarily as an observation deck. Nevertheless, this elevator also has a great practical significance since it connects the two parts of the city: the lower (Baixa) and the upper (Chiado).

The Second Day Visit to Lisbon

You can dedicate the next day to visiting iconic sites such as the Belem Tower and the Jeronimos Monastery, a UNESCO World Heritage Site. The Belem Tower is a kind of monument that commemorates the voyage of Vasco de Gama, which opened the sea route to India for Portugal. In addition, it is a defensive fort.

The monastery of Jeronimos is like a hymn to the Gothic in its Portuguese interpretation, and its apotheosis – the Manuellino style. The famous Portuguese navigator Vasco da Gama rests in this monastery.

You can spend the second part in the largest oceanarium in Europe. More than 16,000 individuals of 450 species live here. About 1 million people visit the Lisbon Oceanarium every year.

The Third Day Visit to Lisbon

In 1998, the international exhibition Expo-98 was held in Lisbon. This event was timed to coincide with the celebration of the 500th anniversary of the discovery of the sea route to India by Vasco da Gama. So, a huge number of objects were built in Lisbon, which later became attractions. To be precise, a whole modern area has appeared, called the Park of Nations.

The Oriente station building is a rather interesting architectural landmark. As conceived by the architect, it should resemble the skeleton of a huge whale. Oriente is a major transport hub in Lisbon. There is a metro station of the same name, a railway station (from which you can go, for example, to Porto), as well as a bus station.

Another facility built for Expo-98 was the Altis-Arena (MEO-arena), which is used for concerts, sports competitions, exhibitions, etc. So, in 2018, the Eurovision Song Contest was held here.

One of the main symbols of Lisbon is the statue of Christ. In the mid-30s of the 20th century, the Portuguese were very worried about the growing military threat. In 1940, at the request of the Portuguese Cardinal Manuelo Gonçalves Serejeira, it was decided to install a statue of Christ in Lisbon. Thus, the Portuguese prayed to the Lord to protect their country. The statue was built based upon the donations, most of which were made by women who tried to save their husbands, sons, and fathers from death. Foxiepass – a service which can help you to find excursions in Lisbon with a private guide.

Lisbon Airport is also a famous landmark of the city. It is worth noting that Lisbon International Airport is the main one in the country. It is the connecting hub for TAP Portugal and Portugália Airlines. Until recently, Lisbon International Airport was called Portelo Airport, and in 2016 it was named after the Portuguese General Humberto Delgado, the founder of the Portuguese National Liberation Front. Lisbon Airport consists of two terminal buildings:

The airport serves more than 14 million passengers a year. Passenger traffic is constantly growing, so in 2009 a second passenger terminal was built, which is now used for domestic flights around the country. The well-developed infrastructure of Portela Airport makes it attractive for transit passengers who spend several hours waiting for their next flight.

Here are some tips for passengers departing from the airport: 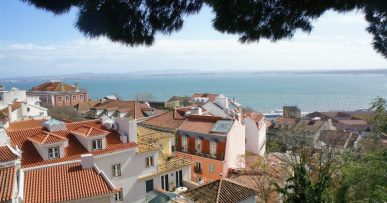